Modern low flush toilets can be a real pain in the butt. Water trickling into the pan can be caused by the overflow or a leaking syphon valve. Overflow leaks are caused by the inlet water float valve not completely shutting off and overfilling the tank. External leaks can be caused by inadequate compression between the tank and pan. Syphon valve leaks cause the inside tank level to be lowered until the inlet valve opens sufficiently to balance the syphon valve leak. The amount of water lost can be judged from the inlet replacement flow.

Back in the year dot, the syphon valve used to be called the flapper valve which supported the tank head of water until the loo handle was turned. The flapper valve then lifted until the tank flushed and emptied, flapping back into place while the tank refilled. Simple, visible and easily repaired if the seal degrades.

The modern loo has a contraption designed to flummox the householder in that it is not obvious how it works. A modern syphon valve is encased in a plastic container, invisible without removing the fitting. The Gerebit container is held in position by two plastic clips which when pushed towards each other release the fitting which can be then lifted out. These are the protrusions seen bottom left in the photograph. 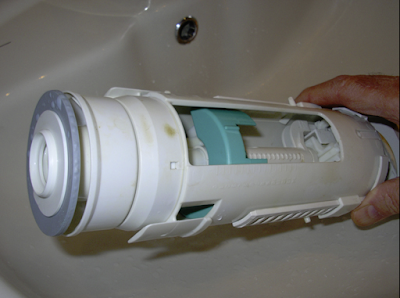 It's a five-minute job to investigate and change the seal, or a hundred quid if your a plumber called in.

1) If you have an external supply valve fitted then close to shut off the water supply. Alternatively, with a piece of string plus a weight, loop around the inlet float valve arm and dangle the weight outside the tank to hold the inlet valve closed, or jam closed with a piece of folded cardboard or .

3) Inside the tank near the base squeeze the two plastic clips inwards and pull the syphon housing upwards and out of the tank. See the picture above. Note: Modern seals may suffer a modern ailment which results in blistering on the surface. This will cause a leaking syphon valve and is the result of osmosis, that is a diffusion of water through the surface seal.

As an interim fix, as long as the seal is not penetrated right through, simply pop the blisters with a pin which will expel the water content and relieve the inbuilt blister pressure. Failing that replace the seal.

5) Reassemble all bits then check the loo flush.

Replacement seal is available via Amazon