History in the Making

I experienced a very emotional photographic moment today (16-07-07). Whilst on a visit to London at the weekend I decided on Monday morning to take a trip to The Truman Brewery in Brick Lane to see if I could catch any of the Art Student exhibitions, that's another story.

My last visit to the Brick Lane area was in October last year. I had a great day recording the vast amount of Graffiti in the area. At that time I also visited the location of a painting by the painter Nicholas Middleton who used the railway tunnel at the end of Pedley St, off Brick Lane, as the location for his painting "Scene from a Contemporary Novel". To my horror on my visit today I discovered the Pedley St and the Bridge are no more along with 90% of the Graffiti I recorded, including some classic Banksy stuff.

Why? Because, around what was the old Shoreditch station, which closed in June 2006, they are building a new station which will be part of the new Overground rail network covering London, as part of the developments for the Olympics. They call it progress. I know there are photographers out there who are recording the East End of London before the Olympics developments sweep history under the carpet. We have a duty as photographers to record the world as we find it. Get out there and get recording before it is too late. You will discover some great images in the process.

The images I recorded in October are now, I assume, of immense historical value.

To see a mix of the images I recorded in October 2006 and July 2007 click the image below to visit my Picasa Gallery or view the slide show.

What to do when your Laptop Dies

I have been going to update my computer system since last Christmas but have not been able to make up my mind which way to jump. In the mean time I have been relying on my aging Dell Inspiron 8200 laptop which is at least 8 years old and gets plenty of hammer.

My very worst nightmare happened, it was only a matter of time! Everything ground to a halt and in the process of shutting everything down the dreaded Blue Screen appeared with the error message KERNEL_STACK_INPAGE_ERROR. According to Microsoft this could have been due to anyone of a number of possibilities all of which made me want to slit my throat there and then. From the unlikely to the unthinkable, new hardware or software, a boot sector virus, loose RAM, motherboard failure, IDE controller failure, HD failure. Because I did not make a note of the code which preceded the error message I had no way of working out which of these failure it could be. Instinct told me it was dread of dreads a HD failure!!!!! EXPLETIVE.......

Where do I go now? It was well past closing time so it was no use ringing the TechGuys at PC World, as though I would! Much better bet, a quick email to my son and heir, better known to some of you as Drewble, he sorts out this sort of thing for a living - HELP.

I awoke to find a reply from Andrew suggesting that I remove the HD from the laptop and insert it in an external HDD cady which could be run from a USB port. He recommended a 2.5in Icy HDD enclosure which I could have obtained fro my local Maplins for the sum of £29.99 but I discovered that PC World which is next door, had an Akasa Integral 2.5in external enclosure for £19.99, so that was the one I bought, I am a pensioner, almost. I also bought a new 2.5in HD for the Inspiron whilst I was at it, a Samsung 80GB HD for the princely sum of £59.99. So with the goodies under my arm I set off home more with hope than expectation. 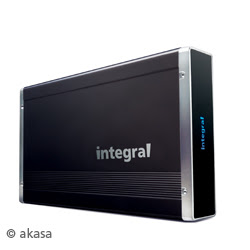 I removed the Inspiron HD and inserted it in the new enclosure, a simple job. The hardest part was getting the HD out of the laptop but it just needed a bit more brute force than I was applying. The only viable PC available to test the new gizzmo was my old Dell W98E. So I installed the drivers that came with the HDD enclosure and connected the USB (1.1) cable and the 5v USB power cable which were provided. The device, according to the literature works with W98E and USB 1.1. I was delighted to discover the HD was spinning in the enclosure but alas I could not see the drive, failure, may be not!

At this point I decided to fit the new Samsung HD to the Inspiron and reinstall XP. this was straight forward the laptop booted from the XP Pro CD and installed itself no problem. I decided to try the Akaska HDD before installing all the Windows updates. Plugged in the cables, again 1.1 on the Inspiron, - BINGO the laptop detected the device and autoplay found all my folders and files - YIPEEEEEEEE......... we were back in business.

The moral of this story is, isn't it always? Back up your data and preferably create a HD image so that you don't have the fag of reinstalling everything.

WARNING - this fix is the equivalent of using a Defibrillator on a dying man it may only work once. If your HD does fire up you may only have the one chance to recover your data, so copy off the important stuff first. Mine ran long enough to recover "My Documents" and all sub-folders, which was pretty large but then it made a horrible grinding noise and stopped never to go again! Best of luck.

Don't blame me if it does not work but you can send a cheque if it does, I will leave the amount up to your gratefulness!
No comments: