Following a prompt from an old mate, I decided to dig out my rather tired and neglected Tenor Banjo and renovate it. I found this reference to the actual model, much to my surprise.

I am in the process of renovating a Windsor Ambassador Supremus Tenor Banjo one of the Whirle range with the registration number 450220. This number appears to refer to the model rather than the individual instrument. The banjo was given to me by my Jazz crazy friend, fellow Guinness drinker, founder and leader of the Wyre Levee Jazz Men, the late, lamented, Dr. Andy Gardner. I hate to admit it but at the time it was just a banjo to me. I had not really taken much notice of its pedigree, hitherto.

When I gave up playing in the band the banjo found itself consigned to a shelf at the back of the garage, since when it has moved house twice. I feel really guilty for not knowing more about it as an instrument, and for having so badly neglected it.

However, prompted by the Facebook post from a friend, to a link of  Blind James Campbell and the Nashville Street Band performing "John Henry" I was prompted to dig it out and get stuck into renovating it. I have ordered a new calfskin head and a new set of strings, so watch this space.

Here are a few photographs of the parts of the banjo in their present state. 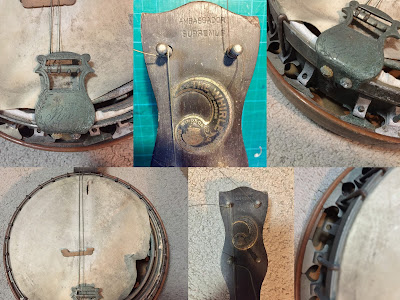 The photographs speak for themselves, the split head, the missing head tensioning hooks (3) as well as the manufactures badge and the patented Pyxe tailpiece. The original nickel plating is quite badly corroded and the woodwork shows a few knocks and bangs. But all in all, it is perfectly repairable and I hope to have it sympathetically restored fairly quickly subject to finding a few missing bits.

For those who may be interested there is a brief history of the banjo in the BBC project "A History of the World - In 100 Objects" web page. One of the objects being a Winsor Tenor Banjo. Follow this link to find out more.

The Tenor Banjo is used extensively in both Irish traditional music and Traditional Jazz. It has a shorter scale than the G Banjo, and 4 strings tuned CGDA, but it is common for Irish musicians to retune down to GDAE using thicker strings. Used in jazz and popular music earlier this century, the tenor banjo has 4 strings and is usually tuned CGDA.

Tenor banjo should not be confused with plectrum style which was used much like the tenor but has a longer neck (22 frets) and a different tuning. Jazz players like the extra frets because they can use the same chord shapes and patterns in different positions. The Plectrum Banjo or 4-String G banjo has the same tuning and neck length as a 5-string G banjo but omits the 5th string. The lack of a 5th string peg facilitates quick thumb movement up and down the neck and as the neck is longer than on the tenor banjo a lot more chord inversions are available to the jazz player.