An item in Guardian 12 February 2009 warned that it will be a criminal offence to photograph police officers under anti-terrorism legislation which becomes law on Monday 16th Feb 09. Both professional and amateur photographers will be at risk of harassment under the new law. A major demonstration outside New Scotland Yard is planned for Monday by NUJ.

So I suppose the next time I take a photograph like this my feet won't touch the ground! But does he count? He is probably a civilian, in wolfs clothing! 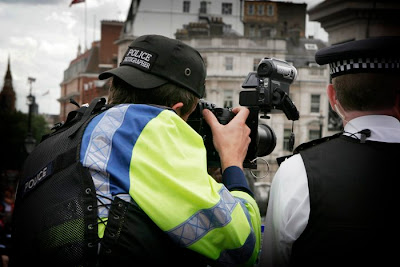 Spotted on a surveillance job in Trafalgar Square.