I purchased a set of Klipsch S4i head/earphones from Amazon December 2010 for use with my iPod Touch. Not cheap at nearly £90, but amazing performance compared with the crap Apple earphones that came with the iPod. Apart from losing the ear plugs on a regular basis I had no problem with the phones, I eventually replaced these with some cheapo ones from another set of earphones, have not lost one since. All went well until about 3 weeks ago when the volume started having a mind of it's own going up and down without any intervention from me. Also the On/Off button stopped working. Inspection showed a crack in the rubber at the neck of the jackplug, see the photograph. 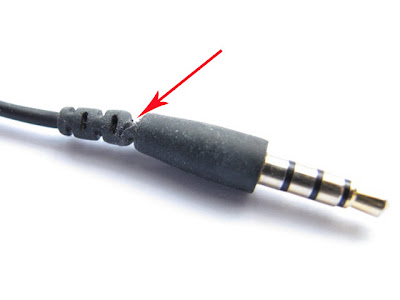 In my opinion there is a design fault in the moulding of the plug at this point. As you can see there is a indentation in the moulding which goes all the way through to the inner wire. Flexing the cable here impinges directly on the wire almost acting like a guillotine. I am sure that many users wrap the wire around the iPod when not in use. This does put a particular strain on the wire at this vulnerable point. I believe the problem could be solved by eliminating this notch from the moulding at this point thus spreading any bending effect over a larger radius and avoiding the pinching of the wire that the current design imposes.

When I checked my Amazon invoice I had purchased the phones on 7 Dec 2010. I sent off an email to Klipsch via the Amazon website. on 5th Dec 2011.  No immediate response, sent a reminder on 8th Dec and received a reply by return from the offices in Ireland saying a reply had been sent but had obviously not reached me. They asked me to send the phones back. Which I did by registered post on 9th Dec. A replacement set of phones turned up on 22nd Dec. So thanks to Amazon and Klipsch.

I have modified my replacement phones by pushing a short length of heat shrink sleeving over the jackplug to protect this weak spot.